Segovia in winter: the perfect family day trip from Madrid

It is snowing when we arrive in Segovia. Heavy flakes float silently to the ground, settling onto the terracotta rooftops of the medieval buildings surrounding Plaza Azoguejo like icing sugar dusted over the top of a cake. Above us, the Roman aqueduct is an imposing and awesome presence, and evidence of the strategic and architectural importance of this town for millennia. 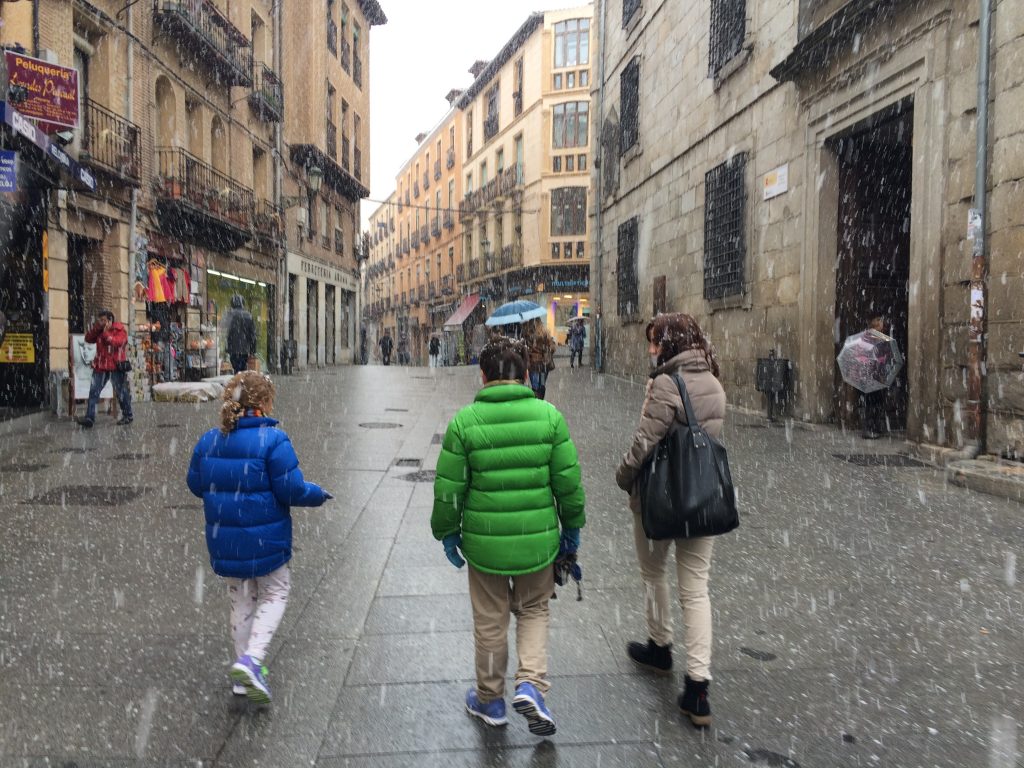 We’ve come to Segovia for a day trip from Madrid, choosing it, on the advice of a friend, over the more famous and visited Toledo. It is the perfect detour – beautiful, easy to explore on foot, packed with cafes and restaurants and easy to reach. The train journey from Madrid’s Charmatin station on the Renfe Ave fast train takes only 28 minutes although the whole journey takes closer to 90 minutes as we have to connect from the centre of Madrid to Charmatin by metro, and take a taxi from Segovia station into its historic centre.

It is bitterly cold on this winter’s morning when we leave the Spanish capital and it’s even colder in Segovia as the snowflakes settle in our hair. My husband and I have left our hats in the hotel so first stop is a tiny shop near the tourist office to kit up with knitted beanies. Second stop is the obligatory churros and hot chocolate that has come to be a staple of our Spanish diet (to the delight of our children Archie and Lulu who think donuts for breakfast is the best thing about Spain).

Grabbing a map from the tourist information office we set out to explore this Unesco World Heritage City. The aqueduct, symbol of Segovia and the most important aqueduct in Spain, is the obvious place to start. Built in the 1st century it has 166 stone arches set without mortar and was used until the mid 19th century to transport water to the city from a spring 17 kilometres away. 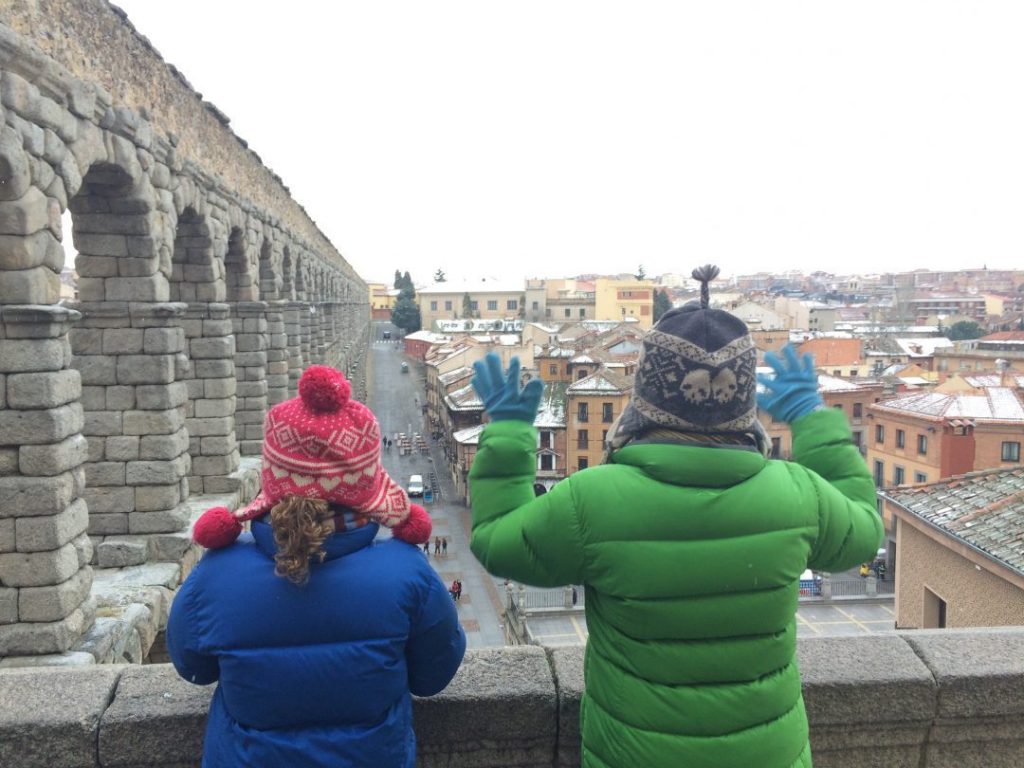 We climb the steps next to the aqueduct for a different perspective of this architectural phenomenon, getting superb views over Plaza Azoguejo as a bonus, then meander through the narrow streets. We find history lessons and photo opportunities at every turn, from the thick limestone walls that formed the boundary of the city in the 11th century, to the 15th-century Casa de los Picos with a façade covered in intriguing pyramid-shaped granite blocks. Originally a mansion for a patrician family, and designed in the style of grand Renaissance palaces in Italy, it now houses the Segovia School of Applied Arts and Crafts.

In the 13th and 14th centuries, we learn, Segovia was home to a significant Jewish community who lived harmoniously throughout the city. This all changed in the early 15th century when their synagogue was confiscated and they were forced to live in a segregated area. Brass plaques embedded in the cobblestone streets indicate the ghetto’s rough location.

It feels like all roads lead to the Cathedral, situated on the highest point of the city. Built between 1525 and 1768, it has Flemish tapestries and significant altarpieces by Van Eyck and Morales among others but the kids are more intrigued by the instruments of torture on display in the light-filled cloister. 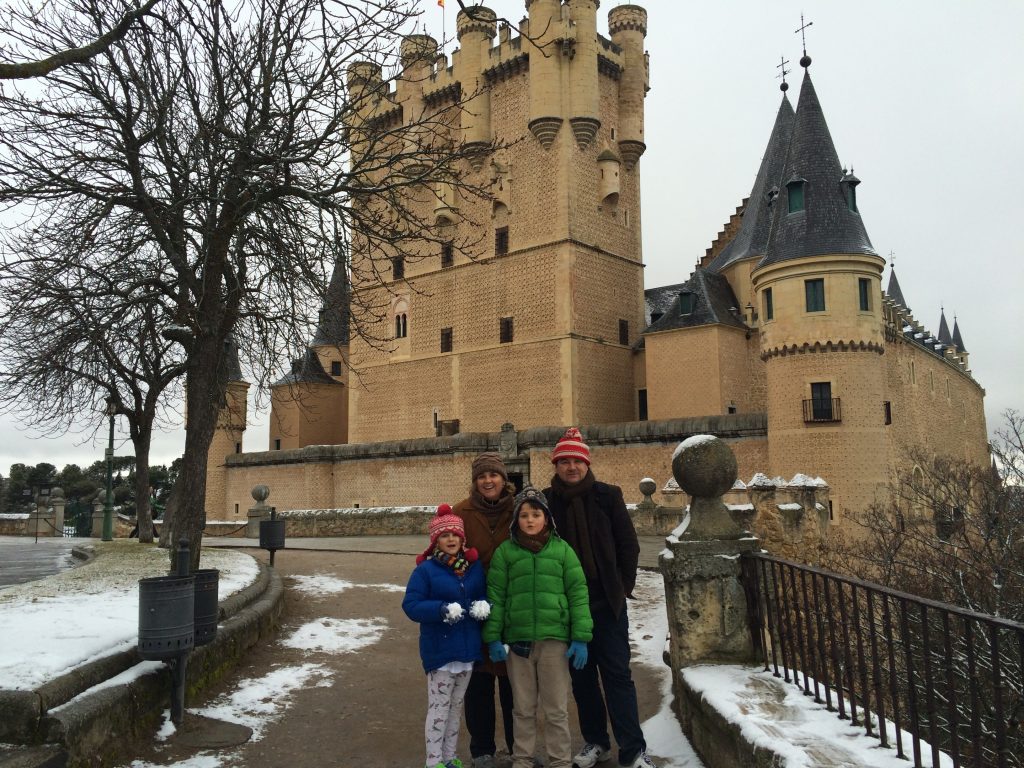 Walt Disney is said to have modelled Sleeping Beauty’s castle in Disneyland on Segovia’s Alcázar, and as we approach the turreted building the resemblance is uncanny. A fortress was first built on this strategic site – a rocky crag at the confluence of two rivers – in Roman times and it has always played a significant role in the history and defence of the Castile kingdom, although the current building dates mainly from the 13th century.

The kids adore exploring its decorated throne rooms and dank prison cells deep in the basement but especially love posing with swords and cannon in the amoury. 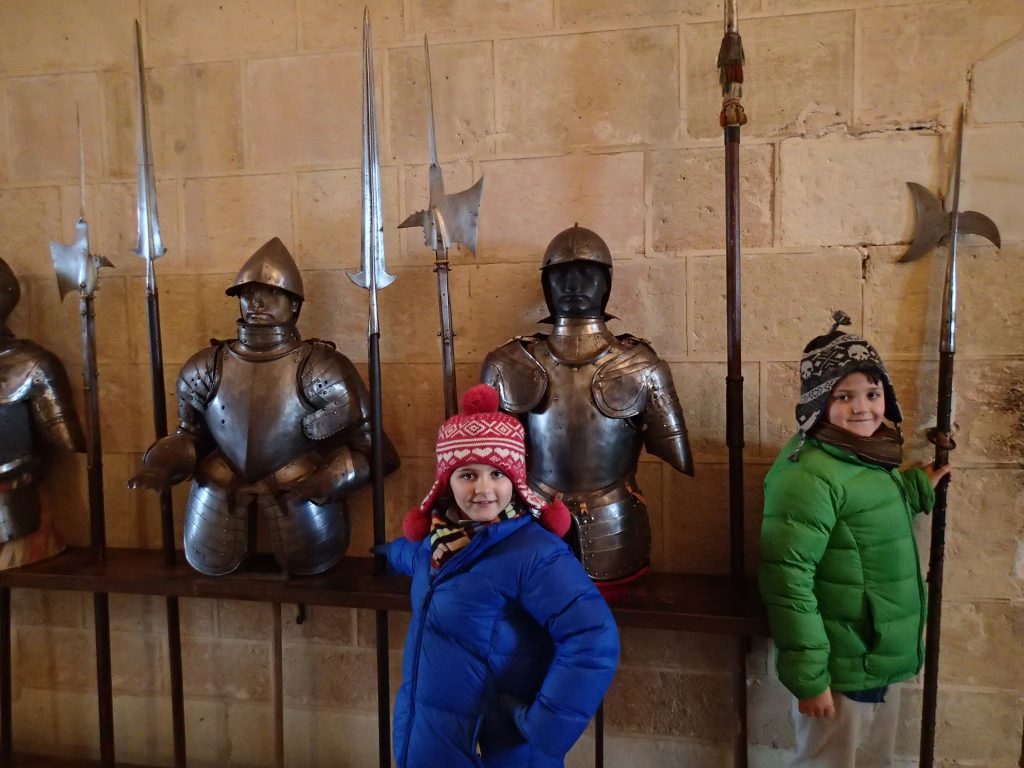 The snow continues to fall as we wander back through the streets, with stops for snowball fights and the creation of the obligatory snowman. It’s weather that makes you hungry and fortunately Segovia’s other drawcard is of the culinary variety.

We mange to score a table at Mesón de José Maria famed for its extraordinary cochinillo, or suckling pig. Our waiter brings the whole roasted, crisp-skinned animal to the table, snout, ears, splayed feet and all, and with a theatrical flourish proceeds to cut up the meat not with a knife but with the side of a bread plate. It’s that tender, and extraordinarily delicious, and even better with a glass of the house red, Ribera del Duero. 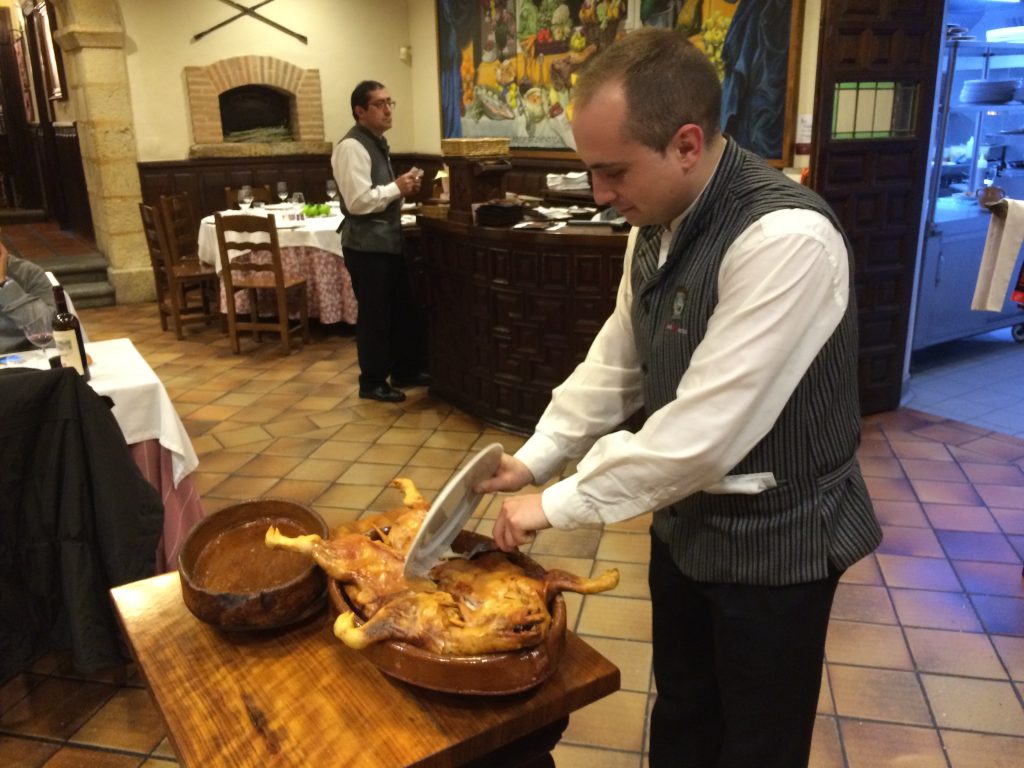 Day trips or detours are underrated. We’re all so busy ticking off big-ticket sights in major cities that we often forsake visiting smaller towns and villages where you can get away from traffic and busyness and travel a little slower. In a city like Segovia, with a good lunch and some unforgettable landmarks, you’ve got the perfect day out.

The journey between Madrid’s Charmatin station (north of the centre but on the metro line) and Segovia takes 28 minutes on a high-speed train. However, Segovia’s high-speed train station is about 5 km out of town, so you need to take a taxi or bus from there into the centre.