Hong Kong has something for everyone including plenty for kids. Here are 20 reasons to go.

At 554 metres above sea level, The Peak offers spectacular views of the high-rise jungle below and Victoria Harbour beyond and getting there is the fun part. Board the Peak Tram from the Garden Road Lower Terminus, and marvel at the vertiginous views as the funicular climbs steeply up through the mid-levels. Before its opening in 1888, the well-to-do Peak residents would travel this route on foot or via sedan chair. When you are stuck in the queue at the lower terminus, spend some time viewing the memorabilia in the historical gallery, including a replica of the first-generation Peak Tram carriage. See thepeak.com.hk. 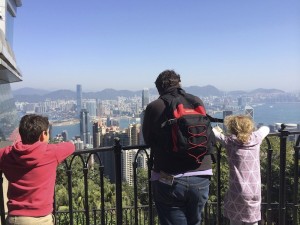 View from the top at The Peak.

A steaming bowl of noodle soup beats cereal and yoghurt any day, especially if it is topped with a fried egg, or spicy pork, or braised chicken, and washed down with a large mug of sweet milk tea. Dai pai dongs, family-run open-air street food stalls, are a true taste of Hong Kong’s history. Once ubiquitous, they are slowly disappearing as the younger generations choose not to follow in their parents’ footsteps and the licences lapse. 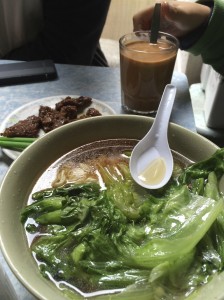 Hong Kong’s breakfast of champions at a dai pai dong.

Tucked behind Admiralty station and the exclusive Pacific Place shopping emporium, Hong Kong Park is a surprisingly tranquil oasis in the heart of this hectic metropolis, with a children’s playground, ponds full of turtles and well-fed carp, a greenhouse and an aviary with 80 species of birds. See lcsd.gov.hk, hk.art.museum.

4. TEA AT THE PENINSULA

Try as Hong Kong might to shake off its colonial past, some of its institutions endure. Tea in the elaborate lobby of the Peninsula Hotel, accompanied by music from a string ensemble, is one of them. Sip a Peninsula Blend tea from a delicate china cup, and help yourself to dainty sandwiches, cakes, pastries and raisin scones with jam and clotted cream from the silver three-tier stands. Tea is served from 2pm to 6pm daily.

In true Disney style, Hong Kong’s theme park is kitsch, commercial and colourful, with dozens of rides, plenty of plasticky souvenirs, and various “lands” – Tomorrowland, Fantasyland, Toy Story Land – to explore. The Grizzly Gulch railway will give both your blood pressure and your pelvic floor a workout, while more low-adrenaline rides, such as the charming It’s a Small World, show that old Walt can still pull the heart strings. The good news for parents is that hot dogs and burgers are not the only offerings; you can get a decent bowl of noodles, too. Set on reclaimed land on Lantau Island, it is easily reached on the MTR, which connects with the Disneyland Resort Line. It is a big day out, which you can make even bigger if you stay overnight at the resort. See hongkongdisneyland.com. 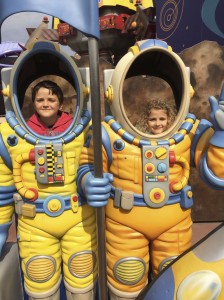 6. STAYING AT THE UPPER HOUSE

Never have my children been made to feel more welcome in a hotel, with their own bathrobes and slippers and the comfy sofas in our (luxury) suite converted by night into fluffy beds, and all the staff referring to them by name. If you are nine and seven it does not get much more exciting than watching movies on demand on the massive television screen and helping yourself to the complimentary “maxi-bar” cookies and sweets, except perhaps taking charge of the iPod Touch, which controls curtains and lighting throughout the high-tech suite. (There is another TV in the bedroom and a third in the enormous bathroom). With some well-received room service – and a babysitter lined up – we grown-ups enjoy the stunning bar on the top floor and the classy Cafe Gray Deluxe restaurant.

David Tang recognised early on that to make traditional Chinese-style clothing sexy, you need to use beautiful fabrics and cut things well. His global empire started in Hong Kong. Initially a modern twist on Chinese fashion of the 1920s and 1930s with beautiful detailing – knotted buttons, mandarin collars, cheongsams – the range of clothing and homewares at Shanghai Tang now has a high-end international designer feel. Regular sales mean you can often bag a bargain. See shanghaitang.com.

The best view of the Hong Kong Island skyline, and the nightly light show that uses these buildings as a multimedia canvas, is from Kowloon, specifically from the harbourside Tsim Tsa Shui promenade. The Avenue of Stars pays tribute to a century of Hong Kong filmmaking with memorabilia, life-size statues and celebrity handprints by actors, including Jackie Chan and Bruce Lee. By day, you can punctuate your amble with visits to the Hong Kong Space Museum or Hong Kong Museum of Art. It is also worth checking out what is on at the Hong Kong Cultural Centre during your stay. See discoverhongkong.com.

Whether it is the sweetness or the relatively mild spicing compared with other regional Chinese cuisines, Cantonese food really appeals to (most) kids. Hong Kong is also as good a place as any to eat really good Peking duck. With two outlets, at the Peak and in the upmarket Pacific Place shopping mall behind Admiralty MTR, Tien Ye is a classy Cantonese that will keep children and their foodie parents happy, with an impressive (if pricey) wine list and classic dishes, including superb barbecued meats, moreish salt and pepper squid and crisp-skinned Peking duck, which is carved with ceremony at the table. See tienyirestaurant.com. 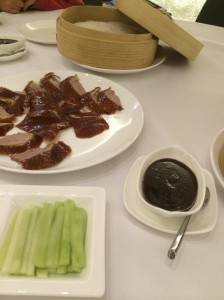 Probably Hong Kong’s most famous street market, Stanley Market is now one of its top attractions, which children will love. The warren of stalls sells everything from personalised chocs – get the kids’ names hand-carved in minutes – to fake designer bags, humorous T-shirts, branded children’s clothing, Shanghai-Tang-esque jackets, quality bed and table linen, and extra luggage to cart it all home. While the market is the main drawcard, there is a nice beach and boardwalk, plenty of Cantonese restaurants, and the Stanley Plaza shopping centre, home to a bunch of fashion and homewares boutiques and the excellent Shanghainese eatery Xia Fei. See discoverhongkong.com.

Hong Kong’s public transport network is easy to navigate and fun for the kids. Buy yourselves an Octopus card, charge it up, and you will have access to all the city’s public transport, including the classic Star Ferry that chugs across the harbour between Central and Kowloon, the extremely efficient MTR system, and the old trams that trundle around Happy Valley and Causeway Bay. You can also pay for the city’s distinctive red taxis – and many retail purchases – with your Octopus card. See octopus.com.hk.

You cannot go to Hong Kong without at some point tucking into its famous dim sum, one of the greatest symbols of the Chinese diaspora around the world. In Happy Valley, the creatively named Dim Sum is a recreation of a 1930s tea house, and offers quality dim sum all day (be warned, it gets really busy at lunch time). Settle into timber booths and choose from a picture menu of more than 70 dumplings, including stand out har gau and siu mai and fancy bundles filled with abalone, prawn and pork and scallop with crab eggs and prawn. 63 Sing Woo Road, Happy Valley.

Overlooking the narrow strip of water where Victoria Harbour connects with the South China Sea, Lei Yue Mun fort is now one of Hong Kong’s most intriguing museums, focusing on the territory’s maritime history. The main building at the top of the steep site hosts a fascinating permanent exhibition covering the past 600 years of Hong Kong’s coastal defence, with military memorabilia dating from the Ming period (1368-1644) to the present. Several galleries are devoted to the first Opium War, the colonial period, the Battle of Hong Kong during World War II, the Japanese occupation, and the post-handover Hong Kong Garrison of the People’s Liberation Army. Children will love exploring the ramparts, ammunition depots, barracks, tunnels and the torpedo station down near the water. See hk.coastaldefence.museum.

The Peninsula, the so-called “Grande Dame of the Far East” is extravagant and opulent and defines the term iconic. Arriving in one of the hotel’s elegant green Rolls-Royce vehicles might not have been on my children’s bucket list, but was definitely on mine. A major renovation brings cutting-edge technology into the luxurious guest rooms, with interactive digital tablets preset in one of 11 languages, through which you control everything from TVs to room service menus. However, it is the timeless elegance and seamless service that is most impressive. See hongkong.peninsula.com.

You don’t have to be female to find something to take your fancy at the Ladies’ Market that snakes through the Mong Kok streets. Haggling is all part of the fun. On sale is everything from iPhone covers to fake designer bags, watches and CDs, T-shirts, jeans and lacy G-strings. Our kids bag a bunch of Lego mini superhero figurines and decorative paper cutters – great for presents for cousins and friends back home. Tung Choi Street, Mong Kok, Kowloon.

The Hong Kong History Museum is an underrated and under-publicised treasure featuring a permanent display covering the territory’s natural environment, folk culture and historical development that is the true drawcard. Children (from about seven) will love “The Hong Kong Story”, an exhibition that starts with prehistoric Hong Kong and continues up to the handover to China in 1997. Exhibits include replicas of village dwellings, traditional clothing and household furniture, an early 20th-century tram, and a re-creation of an entire arcaded street in Central dating from 1881. See hk.history.museum.

If you have one special meal in Hong Kong, head to Yin Yang Kitchen, in a simple 1930s terrace in the hip Wan Chai district. Margaret Xu, a former advertising design director, has a unique cooking style that embraces a back-to-basics approach using the finest organic produce she can get her hands on while exploring Hong Kong’s culinary history and the multiple influences on the region’s food from Cantonese to Chiu Chow and Hakka. Her yellow earth chicken, marinated in spices and roasted for six hours in a terracotta oven she built herself, is quite simply the best chicken you will ever eat. See yinyang.hk.

The Peninsula Academy offers cultural immersion through activities including art tours and cooking classes, some of which are geared to kids. We opt for a family class, where, under Chef Fong’s expert tutelage in the kitchen of Spring Moon, the hotel’s award-winning Cantonese dim sum restaurant, we try our hand at rolling pastry and pleating buns to make something resembling the perfect dumplings we later eat for lunch. See hongkong.peninsula.com. 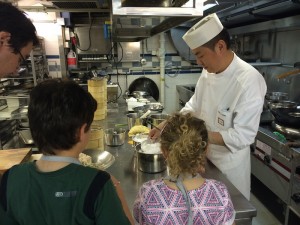 Dumpling making class at The Peninsula

Done Disney? Then head to Ocean Park, a marine-life theme park on the southern side of Hong Kong Island for animal exhibits and roller coasters. The newest attraction is the Polar Adventure, which takes you to both the North Pole and the South Pole in one go, encountering king penguins, long-tusked Pacific walruses, spotted seals, arctic foxes and snowy owls as you go. A cable car and funicular connect the two distinct areas of the park: the Waterfront and Summit. See oceanpark.com.hk.

For most people, and especially families, travelling anything other than economy is a rare treat. While Cathay’s cattle class on spacious A330 aircraft is a cut above most other airlines anyway, if you are ever going to splash out and get a little closer to the pointy end, then its premium economy class is the way to go. The small cabin makes the flight that much more peaceful, there is significantly more legroom, the amenities kit includes eye mask, ear plugs and unguents and the food is terrific. See cathaypacific.com.

A version of this article was first published in the Sun Herald, August 31 2014.