We have family in Japan so the first two weeks were spent in Harafu, a little mountain village two hours west of Sapporo, which is the capital of Hokkaido. It’s up near Russia on the most northern island of Japan. Australians would know Niseko as a ski area, but when we go there in summer it’s very quiet. We stayed in an apartment and spent half our time with family and the rest on our own, just the three of us adventuring. For the last week, we went down to Tokyo and stayed in central Shibuya. I wanted the kids to get that mix of countryside, which they see each time we go, and full-on urban Japan. They’d been to Kyoto before but never to Tokyo. 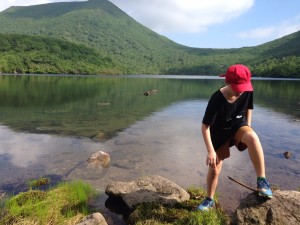 What did you love?

The food, getting a better idea of Japanese culture and seeing family. It’s an easy country to travel in. Many Japanese study English at high school and are happy to practice it on you. They’re also very friendly.

We rented a self-contained apartment in Hokkaido. In Tokyo we stayed in a hotel in Shibuya. You have to do a fair bit of research for hotels because central Tokyo can be very expensive – sometimes up to $1000 a night. It can also be hard to get a three-bed room. A number of hotels would quote a rate but wouldn’t allow (or fit) a third bed.

We ended up spending a bit more than we’d originally planned to stay at the Cerulean Tower, which was right in the middle of Shibuya. It was such an advantage being in the thick of the action. We didn’t have to spend half an hour every day tramping to the train station. It’s worth paying extra for that. It’s also well worth looking closely at the map to locate your hotel and know exactly where it is. There was another place that would have been about $900 cheaper for the week. But when I looked at it closely on a map I realised that we’d need to walk nine or ten blocks to get to the central train station. Doing that twice a day, with a small, 10-year-old girl, just wasn’t worth it both for the time taken and the tiredness that would follow when we’re only there for a week.

How did you move around?

As we only had three weeks, we had to be efficient with time, so we took domestic flights. It’s a 90-minute flight from Sapporo to Tokyo Haneda. Maybe next time I’d think of taking the kids on a shinkansen bullet train, which I’ve done before but they haven’t. It’s a wonderful travel experience in itself. We rented a car in Hokkaido, which gave us plenty of freedom.

In Tokyo, we used trains. There are a whole lot of different lines – some owned by Japan rail, some owned independently, some connect, some don’t – but there are a few key lines that connect you very well to many areas. So if you’re near one of those central stations like Shibuya, Shinjuku, Tokyo Central, it’s like a one stop shop for transport, and within 15 minutes you’ll be at the place you’re going to explore every day.

We each had a Pasmo card which we topped up every couple of days. It’s easy to use and means you don’t have to worry about how far you’re going or which tickets to buy. It also means that you can move quite quickly and easily though the stations and the turnstyles and you don’t have to stop and get your wallet out.

What worked particularly well for your family’s situation?

Having a car in Hokkaido. If you want to get out of the main cities, having a car is the way to go. You do need an international drivers’ licence (which you can get from the NRMA) but driving in Japan is easy. You drive on the same side of road, it’s very well signposted, with much of them in English. The Japanese are a civilised careful bunch of drivers. Once you have a car you can tootle around. Our GPS was in English and worked by plugging in the phone number of the place we were going to. We visited a tiny tofu factory down a back lane and a restaurant out on its own in the middle of a forest. It might not be the same in all parts of Japan but in Hokkaido it’s easy. You can find all sorts of places in the middle of nowhere.

What was challenging for you as a family and individuals?

Finding the right accommodation is often a challenge in Japan. In the cities, business hotels can work well for families – they are a bit more basic than tourist hotels, relatively cheap, and often on the edge of the CBD.

Another option for accommodation is the ryokan; there are many that are not ridiculously expensive. I’ve done this with the kids on previous trips and it is a great life experience. And if you get one with an onsen it means you arrive, have a traditional bath, then have an amazing meal cooked for you, before sleeping on futons in a tatami matt room. It’s a great cultural experience.

Other than seeing family, witnessing the kids seeing Central Tokyo, and throwing ourselves into the maelstrom of Shibuya. We had an amazing adventure every day – usually involving food. Soba, ramen, curry, katsu, sushi. The food is amazing.

We all love Japanese anime so we went to the Ghibli museum in the suburbs of Tokyo. You’ve got to book three months in advance to get a ticket, as it’s like a private mansion in the suburbs of Tokyo. They limit the number of people who can go there each day. JTB in Sydney can help you get tickets. It’s a magical museum, particularly if you’ve seen some of the Ghibli films. And the countryside in Hokkaido, especially up the west coast. You can just drive and stop at little shops and restaurants along the way.

I’d heard a radio interview with a chef called Naomichi Yasuda, who for 15 years ran one of the best sushi restaurants in New York. He had just moved back to Tokyo to set up his own sushi bar in Shibuya, a tiny nine-seat omikaze-style eatery called Sushi Bar Yasuda. I had to book months in advance.

He asked each of us which fish he liked and then he presented this amazing sushi. Sarah doesn’t like wasabi so he kept it out of her dishes, Lewis got a bit of it. But he essentially made a different menu for me as I like fully flavoured oily fish. We had 30 pieces of sushi each, including Argentinian mackeral, various types of toro, Russian sea urchin, saltwater eel, sea scallop, small sardines and king salmon.

He chatted to the kids all night. He talked about fish, about the differences between New York and Tokyo, about how fashions for food have changed. Lewis asked him about how and why he did things. Sarah loves tamago (egg sushi) and he told her that he only used eggs from his home prefecture. Such a lovely personalised food experience.

In a sushi coma. The Waugh kids and cousins after a sushi feast.

We had other great meals too, including in a specialised soba restaurant that focussed on the elegant simplicity of a perfectly made buckwheat noodle. We also went to a katsu restaurant which served katsu everything: pork, chicken, eggplant and more. Everywhere was good, and often surprisingly cheap. $20-$30 for a family meal.

What would you do differently next time?

Next time I would pick a different area of Japan to discover after visiting family, such as Okinawa or Hiroshima.

There were a couple of days in Tokyo where we tried to do too much. I reailsed if you try to pack in too much you can risk spoiling it, especially if everyone is overtired. The kids definitely need their down time.

Do your research before you go to get the best out of a city like Tokyo. I organised our wish list of activities by neighbourhood, and made sure I had something for everyone’s special interests. Lewis is crazy about food and cooking so  I made sure to include Kappabashi which is kitchenware town, selling everything from chopsticks to lacquerware. I love music so I found out where the music shops were. And Sarah loves clothes so I made sure to include Harajuku which is the centre of youth culture and fashion. I also included  wet weather options and quiet day options when we didn’t want to push ourselves. 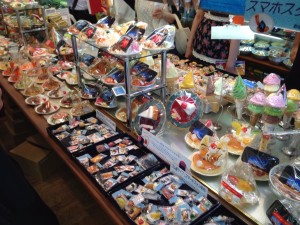 What is the most significant thing the kids got out of it?

Learning about Japanese culture – the customs, the food, the language, and immersing themselves in the hustle and bustle of Tokyo. It’s that classic travel thing – you take yourselves out of your comfort zone and of what you know. For children you expand their worldview, and the idea of what’s normal. I’m lucky, my kids are really open to new experiences. They will give anything a try. There was stuff we tried we didn’t like, such as natto, a fermented soy bean product. It’s the vegemite of Japanese cuisine and it’s like soy beans packed with snot. But we still tried it.

What is your lasting impression of the trip?

For me travelling on my own with kids, Japan was an easy, welcoming country. I was happy to send kids into the public toilets in the train stations alone. I never felt they were at risk. The kids think it’s an amazing country. The food’s great, everyone’s so polite. Lewis wants to go and live there one day.