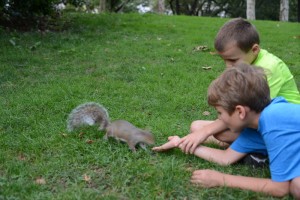 Feeding squirrels in the park

What did you love?

Feeding squirrels almonds in Central Park. Their tails are all puffy and cute. The Lego Store at Rockefeller Centre had an exact model of the buildings and people outside. It was really fun jumping on the big piano in FAO Schwarz toy store (like Tom Hanks in BIG – whoever he is) because you get to play music with the tap of your feet. The giant bubble blower in the park was amazing and gave me a go, then made a bubble to cover me with. It made everything look rainbow. 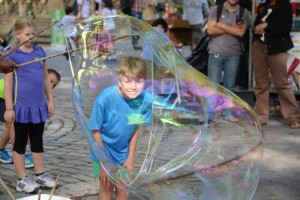 Boy in a bubble

The Roger Smith Hotel, an older boutique hotel. Mum says it has a human name because it makes you feel human in a big city –  free Vermont yoghurt and granola  every morning meant we had a healthy, free start to our day – it’s right near Grand Central Station but rooms are quiet and bigger than most in NYC. 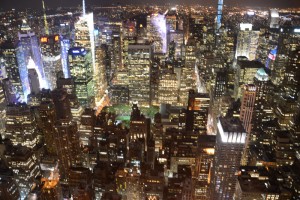 The city that never sleeps

What worked particularly well for your family’s situation?

We kicked the bucket (list) on day 3 after queuing for hours to go to the top of the Empire State Building. Dad said we could come back and see the Statue of Liberty ourselves one day. Instead we went to Union Square Markets and tried hot apple cider and yummy organic chocolate brownies. Not sure about the purple carrots. Then we went to the biggest, scariest, but coolest Halloween Shop. 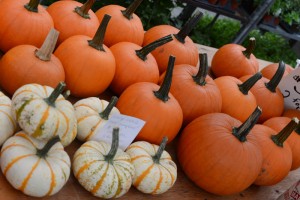 What was challenging for you as a family and individuals?

Shopping. Walking around everywhere – it’s massive but there’s so much to see we covered 53 blocks one day without really noticing. The subway was great – we learnt how to read the maps and ask people where to go. They were very helpful. 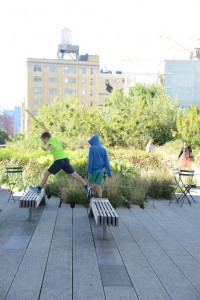 On the High Line

Doing Parkour along the High Line (an 2.3 kilometre disused rail line transformed into a fabulous green public walkway high above the streets). Running around on the lushest grass ever at the Sheep Meadow and the Great Lawn in Central Park. I could sleep on that grass.

We got to fly like a pteranadon in the American Museum of Natural History. The dinosaurs in there were REAL. In the Metropolitan Museum  of Art we saw King Henry III’s armour. He was pretty fat.  Mum and Dad loved going to the (not well known but awesome) bar on the rooftop for a drink with friends, where we could run around. 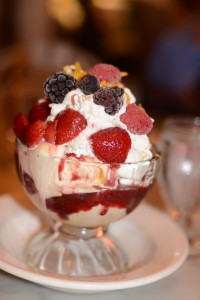 Serendipty Sundae – it holds a world record for biggest sundae’s and there was one worth $693 – it had real gold in it. Mine had so much melted chocolate and icecream and whipped cream I only ate one quarter of it. Jake’s had strawberries and raspberries.

What would you do differently next time?

Stay later in the park to try to see the fireflies. 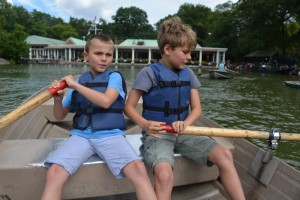 What is the most significant thing you got out of it?

We learnt to row boats in Central Park. And read maps and street signs and ask people for directions.

What is your lasting impression of the trip?

A massive city with buildings that go up forever and no matter what time it is there’s lot’s of people around which meant we didn’t miss out on anything.

Quote from the trip

We all did a toast at dinner one night and my brother Jake said “Here’s to bringing Sam back to where he was born and to the best grass in the world.”

I said “Hail to Squirrels.” 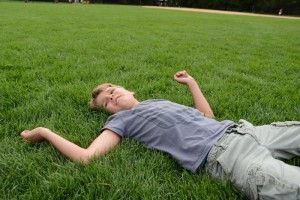 Best grass in the world