When people talk about travelling with a baby they are invariably talking about flying with a baby. If I had a dollar for every time someone asked me how to survive a long plane flight I’d be flying at the pointy end a lot more often! Here are some failsafe tips.

Feed and change your baby just before you board. It is a lot easier and more relaxing for them than trying to do it onboard, and will hopefully avoid having to make a dash to the loo as the aircraft is about to take off.

Take off, landing and sore ears

During flights, the change in air pressure can be uncomfortable for everyone but for children and babies, who don’t know why it’s happening and don’t know how to equalise their ears, it can be excruciating and very distressing. Take off and descent are the trigger times for discomfort so be prepared (see Breastfeeding below). Swallowing helps the ears equalise, as do chewing, yawning, and “popping” the ears by holding your nose and gently blowing out.

When you’re travelling, and especially when you’re flying, breast is definitely best. It’s the simplest thing to do. If you know you’ve got some long-haul travel coming up and you’re considering weaning, wait until after you’ve completed your trip. The hassle of sterilising bottles on the move is best avoided if at all possible.

If you are breastfeeding, make sure you feed your baby when you are taking off and landing. The sucking and swallowing actions can help the little ones adjust their ears to the change in cabin pressure, which can cause a great deal of discomfort.

Keep feeding your baby throughout the flight but try to time the feeds so the baby will still feed well when you’re on the descent. 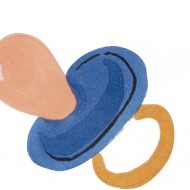 If you are bottle feeding, carry plenty of bottles pre-prepared with distilled or boiled water and formula in pre-measured containers. Always take more bottles than you think you’ll need for the flight.

Give the bottles to the flight attendants way before you need them. They will probably have a few to heat up before take-off and prior to landing and can get busy with meal services and other duties during the flight. This will allow time for the water to cool to the correct temperature.

Always carry enough food for the journey. While some airlines provide infant meals including jars of commercially produced baby food, not all do and you won’t know till you’re stuck on board whether or not it’s going to work for your child.

Most airports have restrictions on the quantity of liquids, aerosols or gels (LAGs) that passengers can take on board an aircraft (less than 100 ml), but you are generally exempt from these restrictions if you’re travelling with an infant or toddler.

Most modern aircraft have toilets with fold-down changing tables. Be warned though: even on the best-maintained aircraft, facilities are pretty unpleasant and claustrophobic; with a baby, toddler or small child in tow it’s twice as bad.

Instead of carrying a bulky nappy bag up the aircraft aisle with your baby or toddler, consider packing a whole lot of single nappy changing kits: a large zip-lock bag with a nappy, disposable change mat, and some wipes in a smaller zip-lock bag. For each visit to the loo, take one change kit with you (rather than the whole bag) and afterwards you can throw the whole lot out. It’s not particularly environmentally friendly – but then again nothing about airline travel is environmentally friendly.

For more tips on travelling with a baby, see: