English speakers are fortunate. Almost everywhere in the world we’ll find someone who can speak our language, so we can pretty much travel anywhere and know we’ll get by. As a result we’ve become a bit lazy with learning languages in order to communicate effectively.

There is however huge value in learning to communicate – even just a few key phrases – when you are travelling. If you become proficient in the language or even master it the cultural experience of travelling can become so much richer and more rewarding. Indeed the act of travelling to countries with different cultures and language is so brilliant for children’s development and their understanding of other living languages. 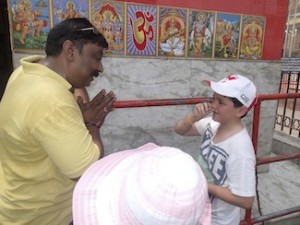 I remember when my son was about 18 months old, and we were travelling to Europe via Hong Kong. He had barely mastered any words of English at that stage, but his dad, who loves picking up a phrase or two in whatever country he’s in, taught him to say “Ni hao ma” – Cantonese for hello. Somewhere in his little brain he worked out that you say that to people who look Asian, like most of the people in Hong Kong, which he subsequently proceeded to do as he walked the aisle of the plan for our onward flight to France. It was very well received by all!Masterclass in Hindu deities

I studied French for years at school and for a little while at uni and as a result I love travelling in France where I get to speak. That said, I’ve been accused of having an accent horrible; on one occasion I was buying a stamp –“je voudrais un timbre s’il vous plait” – in the post office and the person behind the window just gave me a withering look and said “Comment?” (What?) Seriously, I had a postcard in my hand, which needed a stamp, and we could have done the whole transaction with sign language, but I think she wanted to make a point about my pronunciation. 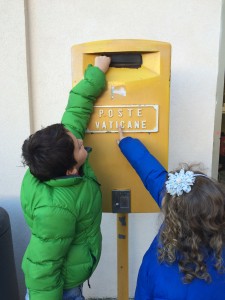 Better still is Italy where I lived for almost six years and became fluent in the language. It’s a little rusty now but I still travel to Italy frequently; once I land at Fiumicino I start speaking with my hands and gesticulating like a true Italian. That’s when I know I am in my second home.

Mastering a language has other benefits. Years ago travelling with my family in Rome with one toddler in a stroller, we were struggling to board one of the little electric mini buses that zoom around the historic centre. A rather unpleasant Roman woman was being very rude about foreign tourists and not wanting to let us onto the bus. Little did she realise that I understood every word she said. I let fly, with my best Italian expletives, and she almost fell over. My husband still talks about that day. He was very proud.

At school my kids learn Italian, as an extra to the public school curriculum. The tuition is worth its weight (and annual fee) in gold not least because the teachers are passionate about what they do and are a complete joy for the kids. One of them even made educational travel diaries for the kids when we were heading to Italy. They also organised a sensational Roman Day at school a couple of years ago where the students tapped into all things Roman, dressing as gladiators, feasting on grapes and “wine” and making traditional mosaics. It was a wonderful collision of language and culture. (Who cares that in Roman times it was actually Latin they were speaking?)

On our recent trip to South Africa the kids got their tongues around a few expressions in the Zulu language – sawubona (hello) and ngiyabonga (thank you). There was real delight in the faces of the people who spoke those languages when they attempted to speak. They also learnt the words of some beautiful African songs, which they are still singing. Indeed all the research says that it’s much easier for kids to pick up different languages than adults, and the younger you start learning them the better.

As this month goes on watch this space as we share with you some useful and entertaining travel phrases. You’ll be ordering your cafe au lait or churros y chocolat authentically before you know it. 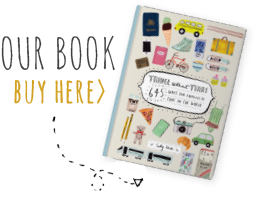